Billy Kimball produced and hosted this game show for the HA! cable network in 1990. HA! was Viacom's attempt to compete with HBO's Comedy Channel, which was started in 1989. The two channels merged into Comedy Central in 1991.

The show was intended to be a "post-modern" game show, self-concious of the genre's traditions and in some way "edgy". Contestants were picked from groups that were in some conceptual way competitors (e.g. insurance agents versus people who have lots of accidents, or bosses versus office wise guys).

I don't have much personal experience of game shows, beyond having watched one of my friends on Jeopardy, and so my theme music could not convey any "self-consciousness" in that regard. Instead I used a Carl Stalling approach to pastiche (placing clashing musical genres in opposition) while still having a distinctive musical theme. 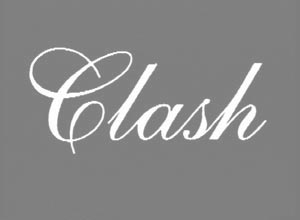 Produced and Hosted by Billy Kimball

Composed and Performed by Carter Burwell

Here is the opening theme to Clash!:

This is a clip of the opening of the show, designed by Tibor Kalman.