"You're watching a movie, in a theater or at home, and starting to doze. You can't keep your eyes open, but the sound of the film still seeps in through your ears, which sadly are never closed. Your mind paints the picture itself in that meaningful but not quite visual way that dreams play out. This is the experience I'd like you to have now." - Carter Burwell's program notes.

This is a concert for music and text, or a set of "sound plays". Frankly we don't know what to call it.

Musicians and actors perform without staging or set, all seated behind music stands. The visual elements are minimalized. As the poster says "Leave your eyes at home."

The project was produced by St. Ann's Warehouse with support from SIRIUS Satellite Radio, United Talent Agency and Sony Pictures. 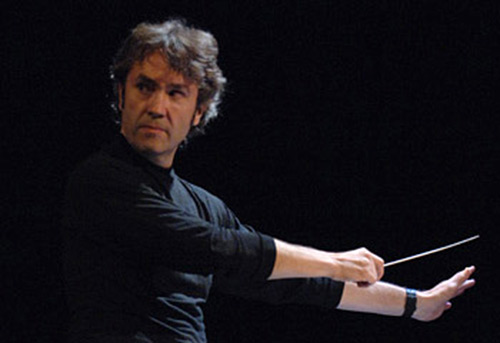 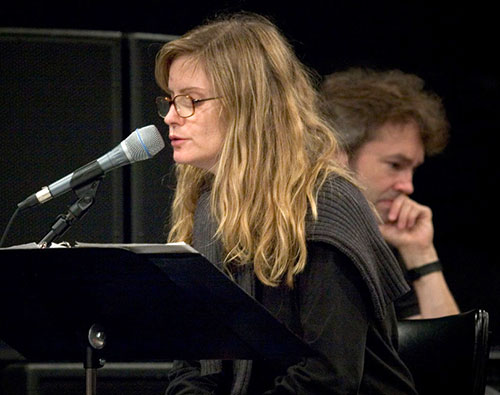 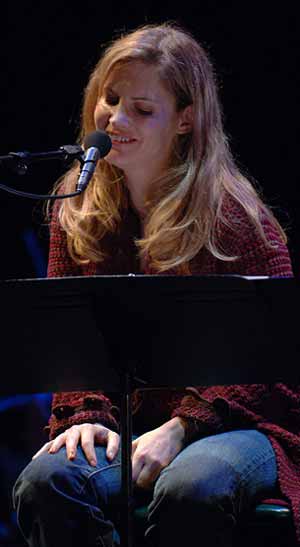 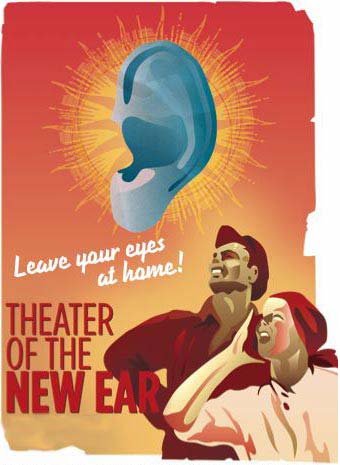 Music Composed and Conducted by Carter Burwell,
performed by The Parabola Ensemble: 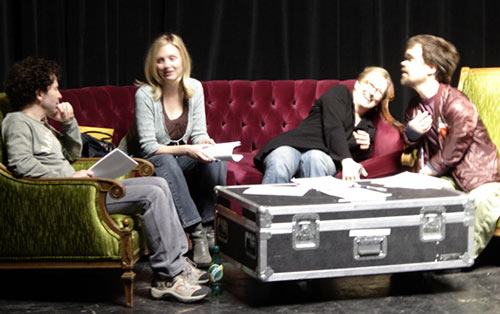 Some (primarily musical) bits from the April 30, 2005 performance of "Sawbones" and "Hope Leaves The Theater": 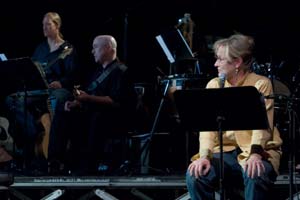 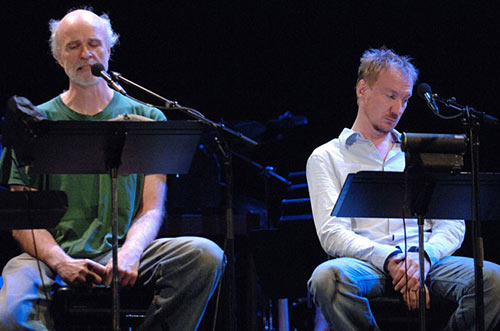 "...Kaufman’s Hope Leaves the Theatre, a hall-of-mirrors story as mind-bending as his Being John Malkovich. Hope Davis, Peter Dinklage and Streep played theatregoers arriving after an interval, commenting on the Coens’ play and the cast they’re about to see: “I like that Hope Davis. She’s kind of non-actressy. I feel I could be friends with her,” Davis remarked.

The roles soon blurred with Davis, voicing an audience member’s anxieties, being harangued by Streep as the actress in the play for talking on her mobile. Streep then became “herself”, berating the other actors as themselves. In the end a critic was criticising Kaufman’s trademark mind-games.

Yes, it was indulgently self-reflexive, but it did live up to its billing as a “sound play”. The actors often evoked a background of news reports and passers-by, even riffing on coughing in the stalls (were some splutters scripted or real?) while Burwell’s score ranged from lift Muzak to late-night menace. And Streep relished parodying her “perfect actress” tag, with trademark flawless accents.... All in all this was a worthwhile experiment..."

"These plays are billed as music theater. Burwell is a talented composer with a knack for creating atmosphere, and he does that very well here. He also has a wit of his own, with sly parodies of Kenny G and the like. He contributes a subtle and important manipulation of mood, without which the performances would lack a crucial dimension." - Mark Swed, Los Angeles Times, Sept. 16, 2005.

"These, remember, are "sound plays". They were written in response to a request from Carter Burwell, the favoured composer of the Coen oeuvre: he had been asked by the Royal Festival Hall to perform a selection of his scores, but offered instead to assemble an evening of new music, set to texts by his talented friends. And the shows emphasise the primacy of sound over sight at every opportunity - indeed, the publicity poster urges: "Leave Your Eyes at Home!"

There's a funny sort of paradox at work. The creative team for this sonic enterprise have won accolades for their work in film, a medium famous for emphasising the visual. Of course, film's debt to radio is undeniable. Not the least of the revolutions sparked by Citizen Kane was the sophistication of its sound, a series of breakthroughs that originated in Orson Welles's fertile radio work. At one of the five screenings of Citizen Kane he attended during its first week of release, the rapt Kenneth Tynan watched with his eyes closed, "to prove to myself that the soundtrack was expressive enough to be listened to in its own right".

Watching the sonically rich films of the Coens, the wonder is that nobody thought of luring them into radio drama sooner. Close your eyes during O Brother Where Art Thou?, and the syrupy accents and jittery dialogue conjure an American pastoral; shut them while watching Miller's Crossing, a gangster film rich with fanciful period slang, and you can almost taste the whiskey. The Coens' contribution to Theatre of the New Ear is another sound-heavy genre exploration: called Sawbones, it concerns characters in a television show about a frontier veterinarian, as well as the show's audience.

Kaufman's play Hope Leaves the Theatre features Streep, Peter Dinklage and Hope Davis, and would be impossible to summarise. This will come as no surprise to people familiar with his cryptic, ingenious screenplays for Adaptation and Eternal Sunshine. Kaufman's critics tend to dislike the tricksy, reflexive style of his films. But at his best, he bears a resemblance to Pirandello: the clever devices and meta-narrative gymnastics disarm the audience's defences, letting him deliver an emotional punch. He has a knack for jolting audiences out of the usual narrative ruts, forcing us to engage with his stories in original ways.

That provides a clue to the real value of Theatre of the New Ear. At the start of Henry V, the Chorus instructs the audience: "Piece out our imperfections with your thoughts" - that is, supply with your imagination what the actors cannot with their bodies and materials provide. In a sense, radio drama is all imperfection - a kind of play that exists only when audiences make an active, sustained effort of imagination. If theatre has any particular power left in this media-saturated age, it lies in enticing audiences to be less passive and start engaging their creative faculties. How odd that it takes four film-makers and a bunch of movie stars to remind us." 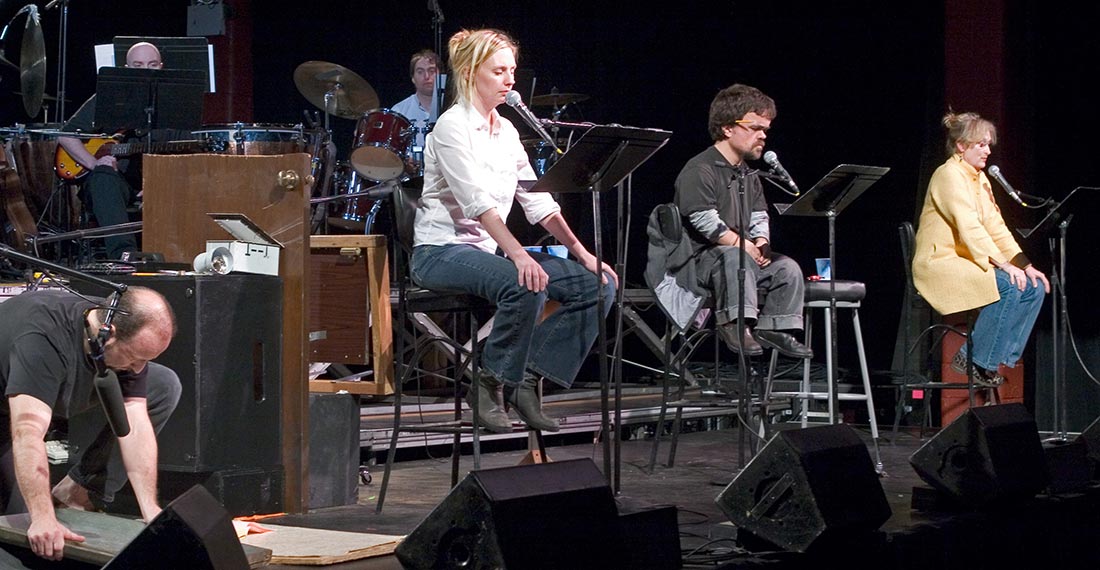 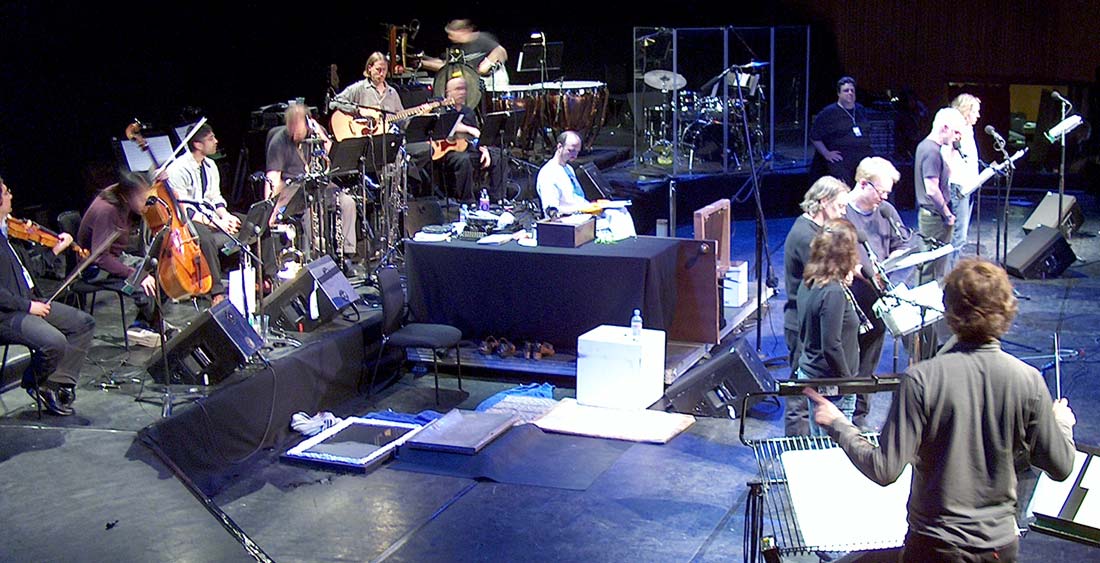 Celebrities Opt to Be Heard Rather Than Seen is a New York Times article on the piece, April 10, 2005. 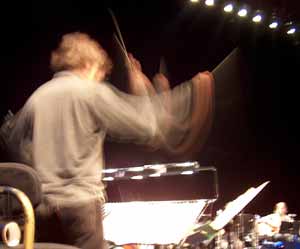